The key to using flashbulbs (or any manual flash system) is the concept of guide number. The guide number expresses the amount of energy contained in the flash in a way directly useful to the photographer, and relates distance covered to lens f-stop, as follows: where F is the lens f-stop, G is the guide number, and D is the distance.

Whereas for electronic flash (strobe lite), the guide number depends only on the film speed, for flashbulbs a guide number is stated for a certain film speed, shutter speed, and film sensitivity (B&W or color).

The reason that shutter speed enters the equation is that a flashbulb flashes over a relatively long period of time, and shutter speeds of faster than 1/30s cut off some of the light from the bulb.

There are various adapters for using the smaller bulbs in the larger reflectors, giving less light, but over a broader area, and with less hot spotting. The beam angle of the 7" reflector is 120°. The Graflite 5" reflector has a sliding neck adjustment. At the position marked "normal," the beam angle is 60°. 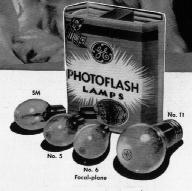 The General Electric #5 flashbulb was a staple of the press corps in the late flashbulb era. These bulbs are still readily found, warehoused in old camera stores, and can often be had for under $10/doz. When used with ISO100 B&W film, they give a guide number of about 200 at 1/100s shutter speed. Approximate 1,000,000 peak lumens, with 14,000-16,000 total lumen seconds output. For use in a 5" right-angle bayonet reflector, or a 7" medium base reflector with a screw-in adaptor.

The Sylvania Press 25 was equal to the GE #5 bulb. It reaches its peak about 5ms earlier, and so stops action a little better. It's often considered slightly brighter than the GE #5, but you'd probably have to have a well-adjusted shutter and flash synchronizer to tell. For use in a 5" right-angle bayonet reflector, or a 7" medium base reflector with a screw-in adaptor.

The blue-coated bulb counterpart to the #5. For color photography. For use in a 5" right-angle bayonet reflector, or a 7" medium base reflector with a screw-in adaptor.

A long-flash bulb for use with focal-plane shutters. Not useful for 4x5 photography, because of the lengthly travel time of the shutter.

A screw-base (also called Mazda Base or Edison Base) bulb, the about size of a 25-watt appliance light bulb. About two stops brighter than the #5. For use in a 7" medium base reflector. Rather bright.

The blue-coated bulb counterpart to the #22. For color photography. For use in a 7" medium base reflector. Rather bright.

Smaller than #5 bulbs, these bulbs require an adapter to fit into 5" or 7" reflectors. In such a reflector, they provide an even light. Flash synchronization time may differ from #5.
Browse to Flashbulbs for more general information.
Move on to Flashbulb Equipment Recommendations.


Brought to you by Graflex.Org